(originally written by Tom Kail and posted on Tom’s blog)

The design for BattleTabs originated from Battleship, a fairly well known board game. One of the most interesting parts of the design process has been analysing the game to find how it ticks, and pushing it in a direction that suited our goals. I thought I’d take this opportunity to share how that process went down!

When I joined the team in January the gameplay for BattleTabs was just about the same as Battleships. The goal was to rework the design so that the game would have longer appeal, could be updated to stay fresh, and simply to make it more fun!

(The current version of BattleTabs!)

The first thing was to break down what made Battleships fun! I played lots of different versions of Battleships and noticed a few things:

We considered lots of other ideas too, like increasing the number of ships, adding a wager system where players could bet on the likelihood of a tile containing an opponent, only allowing players to play adjacent to tiles they’d already hit, and a puzzle mode - some were discarded, others set aside for future updates!

We were keen to start improving the game immediately and incrementally, so we focused first on the “Minesweeper” concept, which solved a good number of my issues with traditional Battleships at once.

Me and Brandon tested it on paper and were pleasantly surprised to find that for once, the theory neatly panned out in reality!

Mike implemented this design and put it live not long afterwards. 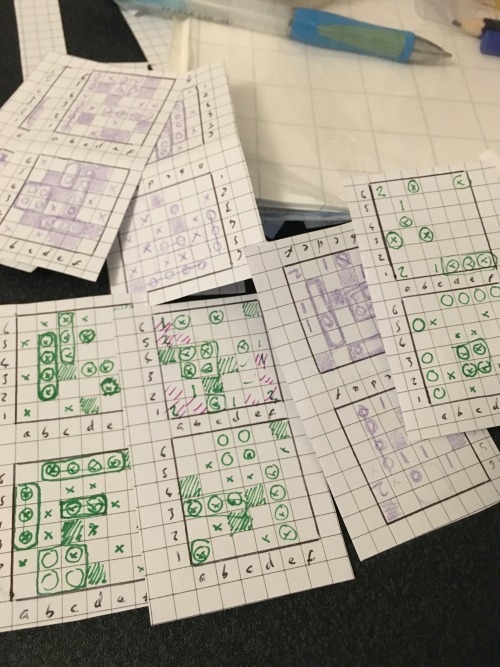 (Some of the many, many scraps of paper used for playtesting!)

At the same time, we were thinking about ways to give the game more lasting appeal. The keys were progression, depth, and community. We wanted to build a meta-game that enabled us to reward play with valuable in game commodities, and encourage players to form stronger social bonds.

One of the ideas considered was a “factions” system (common to a few multiplayer games, including Pokemon Go), where players of a faction could lay claims to territory on a world map by winning games. We eventually decided that such an expensive system might be too risky while the game still had a relatively low playerbase.

The idea that eventually stuck was to expand on the “special abilities” concept we’d considered previously. The idea was that players could collect new ships by winning games, and use them to create their own fleets that helped them to gain an edge over their opponents. A levelling system would be employed to provide an extra reward and help matchmake players of similar skill and fleet power. 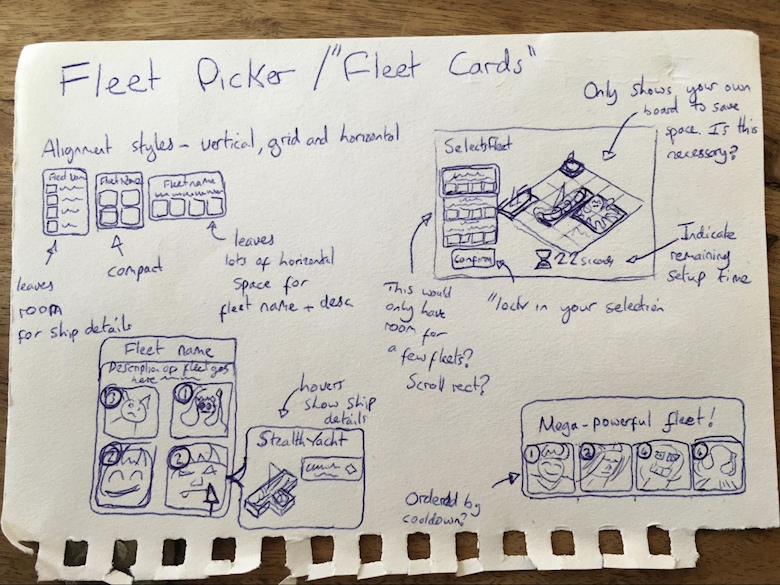 We prototyped the concept as we had before - this time with the pandemic preventing real-life meetups, over Skype. We were pleasantly surprised how many interesting abilities we were able to think up, although to ensure we could implement and test the changes relatively quickly we decided to start with 4 predefined fleets with relatively basic ships, with the ships/XP economy as a future update.

The goals for the 4 fleets we wanted to launch with were clear: 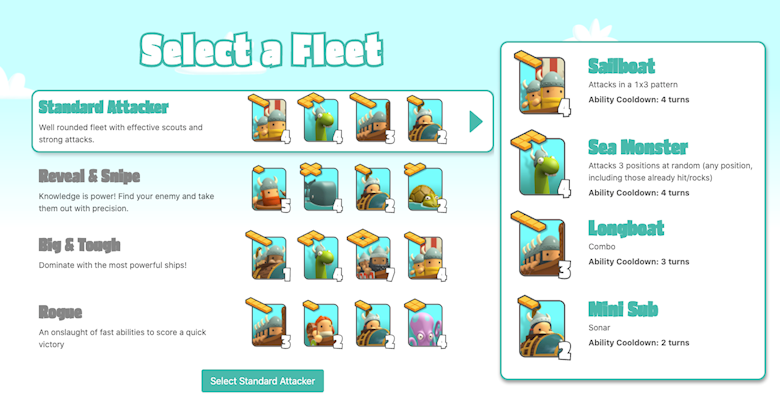 Playtests went well, clearly increasing the variety and nuance of interesting situations, and making decisions over which ships to attack more interesting. One of the big advantages of the system was how easily tunable it was - if something was overpowered we could change the effectiveness of the ability, or if that wasn’t so easily possible, the cooldown.

Something that did surprise us was how unclear the effectiveness of physically larger ships was. On one hand larger ships were easier to find, but on the other they took longer to destroy. Smaller ships only really seemed more subject to randomness, rather than “better” or “worse”, with a lucky player destroying them in one hit, but an unlucky player unable to find them.

The biggest downside was the added complexity - players would now need to read the descriptions for each ship to understand how they functioned, and select a ship each time they wanted to use an ability - low complexity relative to most competitive games, but a large step up for us. Ultimately we decided that added complexity was necessary to increase depth, and it seems likely that any solution that increased depth would have the same issue.

A new role for Sonar

In one way this update was a step back - the “sonar” update was popular and I was incredibly happy at how elegantly it resolved the “lack of skill” problem. It was an effective enough ability that we briefly considered keeping it as the default (with no ship selected) attack, but eventually decided to make it an ability in itself. As a rule of thumb, I still believe that fleets should always have one ship with some form of sonar, or at least some form of vision ability such as the new “reveal” ability, which is less interesting but also less powerful making it a useful tool for some ships!

Looking to the future!

The fleets update launched two weeks ago, and so far it’s been a success! We’ve been improving social aspects, allowing players to add friends, use emoji and invite rematches.

In the near term we’re looking at some minor design tweaks and contemplating a few new fleets, and in the longer term you can look forward to special events, progression systems, and more ships and fleets! To stay up to date, the Discord channel is the best place to get the latest news!